Contrary to Government’s assessment that the PTI and PAT public protest in Islamabad which started in August 2014 would have limited shelf-life and will not last beyond a few weeks, the Islamabad dharna – literal meaning in Urdu – stay put – has continued to attract the people and become a family affair beyond the voices of angry young men. If the growing interest in the daily speeches of Imran Khan and Tahirul Qardi are any guide, the protesters do not seem to be going away any soon despite the hot sunny days and monsoon rains of the last two months and the soon-to-come wintery nights of October. Media channels which compete with each other to replace old news with new headlines discovered to their surprise that the most watched channels by Pakistanis in the last few weeks were not entertainment programmes but news channels providing daily coverage to the dharna. Even housewives seem to have forsaken their favourite TV soaps to watch the happenings around the neighbourhood of Islamabad D-Chowk and Blue area on a daily basis. And now the protest is reaching to other cities and is covered live on You Tube, Whats Up, Twitter, Facebook, Flickr and Pinterest by its supporters and critics.
No one in his wildest dreams imagined that soon after the protesters reached Islamabad last August, the Prime Minister will pack up and leave Islamabad and agree to resign from his position, as demanded by PTI and PAT supporters. True that there were a few days in the early phase of the dharna when the role of the armed forces was not clear and the Government suspected the usual trick, namely the third force to usurp its democratic authority. However, after the armed forces made it clear that it was not their business to clean up the mess politicians had made, the Government knew for sure that the dharna will not be able to shake its writ and legitimate authority to govern until the next general election mandated by the constitution.
Despite this reassured position, the Government lost political ground considerably from where it stood in July when the dharna was still in the offing. All the steps it took to address the protest backfired on itself. Events went in favour of PTI and PAT instead of reinforcing the position of the government. The coming together of the main opposition PPP under the already discredited former President did not help build the image of the Prime Minister who was seen dining and feasting his political rival in Lahore and reasserting his legitimate right to govern as the elected prime minister of the country. A major concession granted by Prime Minister Nawaz Sharif to PTI by establishing a judicial commission to inquire into Imran Khan’s allegations of rigging of 2013 general election was much too late to call off the dharna. The initiative was badly timed and was handled unwisely by the Prime Minister. Even the terms of reference of the commission drafted by the law secretary left much to be desired. 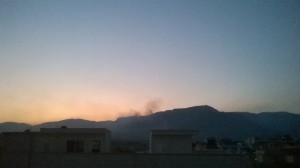