Some countries with whom Pakistan has close political and economic ties and two inter-governmental bodies (the EU and the Commonwealth) have issued public statements on the present political situation in Pakistan. The Parliament and its representative parties are supporting the PML-N government of Mian Nawaz Sharif on the one hand, and on the other hand are two smaller parties which have brought people power to Islamabad in thousands who are now displaying their prowess in front of the sensitive institutions in Islamabad for over a week.

These overseas statements range from standard diplomatic expressions of concern to clear messages of advice and caution aimed at certain quarters. They all, however, stress one point that the issues must be resolved politically and peacefully without giving any room to the military to repeat the events of 1999 when the elected government of PM Nawaz Sharif was removed by General Musharraf on charges of bad governance. Statements from political parties and civil society within Pakistan bear the same headlines and contents with varying degrees and local flavours.

The arguments advanced by both sides of the political divide are clear and make sense when seen in the context of good democratic governance. But what will happen next and how this deadlock will be resolved is still an open question. The two protesting parties (PTI which has representation in the National Assembly and governs one province – KPK) & PAT (which has no presence in parliament but is led by a motivational preacher cum scholar) allege that it is their constitutional right to stage protests and demand PM’s resignation. Their main argument in support of their demand is that the last elections were massively irregular or rigged and all doors available to them in the system which they have been knocking have remain closed without any response. One of the two protesting parties (PAT) goes further than this demand – it is asking for a complete overhaul of the electoral system, full implementation of Constitution in regard to State responsibilities, review of the rules of business of the Executive and devolution of the Judiciary down to village level to make justice available at the doorsteps of the common man. Together, they have around 50,000 protesters comprising families, women and children who are staging sit-in in front of Parliament since last week. Even though the figure of protesters fluctuates in day and night time and many take breaks to sleep at home and freshen up, the presence of so many people in the open grounds of Islamabad’s most sensitive roads in close proximity to the cordoned off diplomatic enclave poses a serious security risk for all. Violence cannot be ruled out because the speeches have been fire brand and full of emotion which can cause a mass surge on PM House and adjoining government buildings. A police crack-down on the protesters is also possible from the government to end the sit-in and disperse crowds. Better police management and patience and flexibility on both sides have helped keep peace but there have also been tense moments. Last but not the least there is the threat of a terrorist attack by Taliban to take advantage of the situation and force the army to take over the government. Their aim will be to engage the army on many fronts and weaken its hold on the ongoing military Zarbe Azb operation currently under-way in the tribal areas of Pakistan which have provided safe havens to the terrorists. Of all the options, this scenario is the worst and will invoke Pakistan’s suspension from the Commonwealth once again.

The government, on the other hand, is justified in saying that all solutions must be found through dialogue and within the Constitution and Parliament. The Parliament for now is not in favour of any mid-term election nor is it in favour of an in-house change of PM. The second largest party in Parliament, the PPP is issuing vague statements – the party supports the Constitution and parliamentary processes but it is highly critical of the way the government has mishandled the protests. The PPP will be politically strengthened if the ruling PML-N in the Centre and in the Province of Punjab (Pakistan’s largest and in many ways trend setting province) comes out bruised and weakened from the crisis or if the government of PM NS is wound up under duress, creating once again a situation where an elected PM is robbed of his 5-year electoral mandate so early in his term. Ironically, PM NS has no record of good governance to defend himself but he has the electoral mandate and the Constitution on his side. He also has the support of provincial governments and smaller political parties. The civil society is however divided on the verdict and so is the media.

The protesting marches have been fed adrenal-soaked speeches every few hours and it is very hard for the two leaders of PTI and PAT to slow down the momentum they have generated in the marches thus far. It is inconceivable that without any major political gain they will take a reverse drive to cool down on their own. One positive factor is the introduction of folk songs and home learnt dances to keep people entertained in a city which is otherwise socially infertile and entertainment starved as far as ordinary people are concerned. However, it is also a clever ploy by PTI and PAT to keep their crowds in situ, without causing significant reduction in their numbers.

Within Pakistan, there are only three forces who can defuse the crisis – the President, but everyone knows he has no political personality nor any prowess to act as a credible arbiter. The second force is the army which has learnt its lessons in the past and is guided by ground realities and external signals of disapproval and is wisely not in a hurry to intervene. The army also thinks that by bailing out PM NS from this crisis, they can expect more cooperation from PML-N government in the future. Until recently, the army has had a rocky relationship with PML-N government on the issue of General Musharraf’s trial, relations with India and launching the military operation in North Waziristan.

The third and final force is the judiciary. The CJ could have ended the protest by ordering a high-level judicial inquiry into the allegations of election fraud and given the ruling that, if proven, a mid-term election under a caretaker government will become mandatory. This has not happened because there is a serious trust deficit between the protesting parties and the government and they suspect that PM NS and his hawkish ministers will prevail upon the new commission to prevent a transparent and fair investigation. Ironically, the TORs of the commission which was requested by the government from the CJ have been drafted by the law ministry in haste without giving much thought to the larger issue and are likely to be rejected by those opposition political parties which are directly concerned with it.

Under the circumstances it makes good sense to seek external support from those inter-governmental institutions which specialise in democracy, election observation and democratic reforms. The organisation which is closest to Pakistan and has no conflict of interest whatsoever is the Commonwealth. It has a mechanism to offer Commonwealth good offices to countries which face internal conflicts arising between political parties or democratic institutions. The Commonwealth also has a built in mechanism to suspend countries which are under military rule. The Commonwealth has the ability to talk to all stakeholders as an impartial and neutral arbiter and fill in the trust deficit. The Commonwealth could make a suggestion to both sides that the commission requested by the government to investigate the vote rigging allegations could be overseen by a group of independent Commonwealth observers drawn from selected countries who will complete their work within an agreed deadline. If such a role is accepted both by the government and by other political parties, in particular PTI and PAT, the protests can end on the mutual understanding by all parties that if the commission finds a pattern of serious and persistent rigging in a large number of constituencies, the government will immediately call mid-term elections under a neutral administration. If on the other hand the commission finds that the level of irregularities is small and is consistent with what normally happens in other Commonwealth elections without any evidence of systematic fraud, then there will be no mid-tern elections and no resignations and PML-N will have a full 5-year term without further street protests.

If Commonwealth good offices are requested by the government and are accepted by the London based organisation, this will be a win-win for all because at the moment there is no one in the country who could be seen to be neutral other than the three forces which are mentioned above but each has a problem which prevents it to act decisively.

The only other alternative is use of force by either the government or the protesters which will be disastrous if there are large number of casualties either by accident or by design of the agent provocateurs, or if the army moves in as a recourse of last resort. The TTP would also want the military to get distracted and loosen its grip on the operation in North Waziristan. As Interior Minister has repeatedly said, the terrorist threat is real and imminent; it cannot be dismissed lightly.
Syed Sharfuddin
22-08-2014
The writer is a former Pakistan diplomat and a former Special Adviser at the Commonwealth Secretariat London. 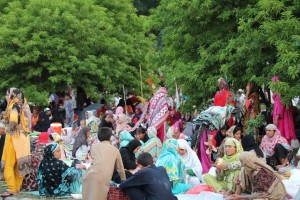